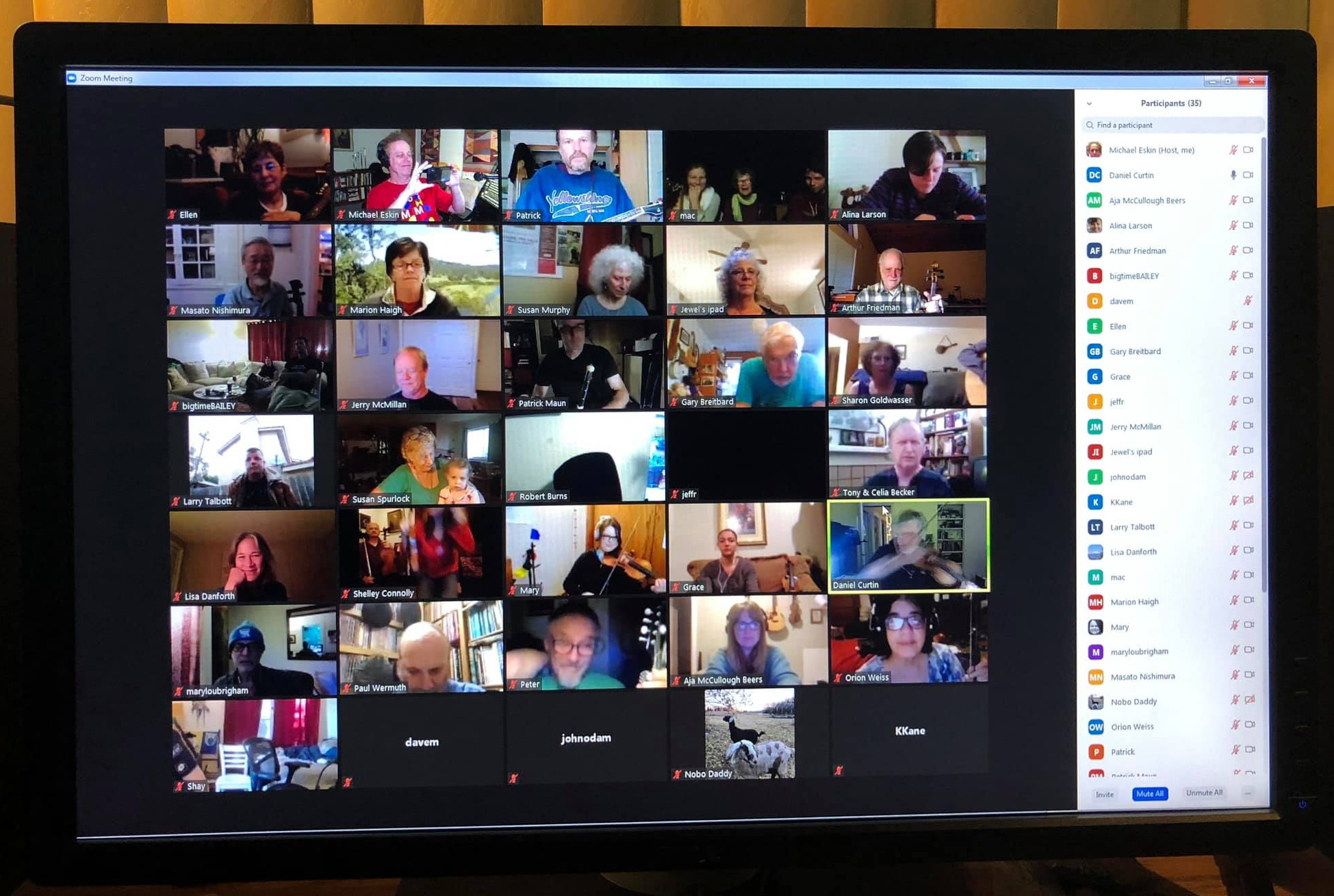 “The Ould Sod” is the San Diego neighborhood pub where I’ve been co-hosting a session every Tuesday night for over 20 years.   Of course sessions in person are on hold for the duration so we’re all looking for other ways to have tunes together.

Here’s how it works:

Anyone on the meeting may volunteer to start a set.

I mute everyone’s microphones except the person playing the set.

The person plays their set, and everyone else can hear them and play along.

Because only one mike is un-muted, you hear only the person who started the set and yourself.

When done with the set, I will un-mute all the microphones (for those who have allowed the meeting host to un-mute).

At that point anyone can pick a new set to play and I do the same muting setup as before for the next set leader.

If you enjoy the sessions, please consider donating a few dollars to my PayPal tip jar to help pay for the Zoom Pro account required to conduct the multi-hour sessions:

For best sound on Zoom, either on a desktop or mobile device there are two audio settings you need to change for best sound when playing music:

On the Desktop versions, you will want to set “Suppress background noise” to “Low”:

You must select “Show in-meeting option to “Enable Original Sound” from microphone” in order to see the High Fidelity music mode option.

If you disable echo cancellation, you will need to wear headphones when using Zoom. Also, when using these higher quality settings, Zoom advises connecting to your network via Ethernet instead of WiFi for best performance.

iOS versions of Zoom now support the “Use Original Sound” option to improve sound for music. This turns off the background noise suppression that often causes instruments to get cut off on sustained notes.

You have to turn it on in both your meeting settings as well as when on a Zoom meeting.

I’ve recently put together a standalone iPad-based voice and instrumental audio pre-processing system for use with Zoom meetings and other online broadcast platforms.

I’ve received some good reviews from others on the quality of the sound produced, so I’m sharing the setup.

The system is designed to plug into the audio input of a computer running Zoom to provide superior audio quality than a microphone alone and has nearly infinite flexibility.

This iPad-based setup gives me much more flexibility and control of my sound processing during live streaming than my previous analog setup ever could. It will even run on older iPads. I am using an iPad Air from 2013 running iOS 12.4.5.

The setup consists of a Shure MV-88+ microphone, microphone stand, an iPad (attached to the stand using an IK Multimedia iKlip 2), and an Apple Lightning to USB-3 Camera Adapter.

The Shure MV-88+ could be connected directly to the iPad via the provided Micro USB to Lightning cable, but the audio processing software would drain the iPad in about an hour. Since I’m typically using the setup for two to three hours continuously I needed a way to both hook up the microphone and power the iPad at the same time.

To solve this problem, I connect the MV-88+ using a Micro USB to USB cable to an Apple USB3 to Lightning adapter plugged into the iPad. I can then plug a standard Apple charging cable into the Lightning port on the adapter. This allows me to power the iPad while using the microphone.

I initially selected the single front facing cardioid pattern option, but further experimentation had me switching instead to the 60-degree (narrowest available) stereo option for better background noise isolation. Both are good options. I set the microphone sensitivity in the Motive app so that on whistle I’m at nearly max level, but not overloading the microphone. You will also want to turn off any compression or EQ enabled in the Shure Motive app. Once you’ve done this, the MV-88+ stores the configuration and you can then use the microphone over USB for other apps.

Any other high-quality USB microphone would also probably work with a similar configuration.

To get the sound out of the setup and into Zoom, I run a stereo 1/8″ cable from the iPad headphone output jack runs into a input channel on my mixing board, and then from the board into the input of the audio card in the Windows computer I use which is running Zoom. The mixing board board allows me to set various levels into Zoom as well as control my own monitor levels in the headphones. If you don’t have a mixing board, you could just run the output of the iPad headphone jack directly into the audio line-in on your Mac or Windows computer.

The iPad is running AudioBus as a plug-in container app, and the following AudioBus compatible plug-ins in a chain:

AUFX:PeakQ – EQ – Allows me to do some voice equalization for that “NPR” radio announcer sound.

AUFX:Space – Reverb – A tiny bit of added room ambience is more comfortable both for me in the headphones and for other people in the Zoom meeting.

Below are screen shots for the setup of AudioBus and each of the AUFX plug-ins:

Additionally, if you need background noise reduction, for example from an air conditioner, and want something more subtle than the hard noise gate in AUFX:Push, I’ve had some success with putting an instance of Audio Expander AUv3 at the very front of the plug-in chain for use as a downward-expander. A downward-expander does the opposite of a compressor, it takes any sounds below a certain loudness threshold and reduces them by a controllable ratio while passing through all sound above the threshold. It provides a much more comfortable sounding transitions when speaking or playing than using a hard noise gate under the same background noise conditions. Note that this doesn’t eliminate the background noise while you are talking or playing, but can quiet it significantly in a controllable fashion during periods of silence. You will need to tailor the threshold and expansion shape settings for your specific situation:

Here’s a demo video showing the system in action:

Here are links where you can find more information of for each of the components used in the system:

I’m trying out the next incremental evolution of my Zoom online session hosting audio setup.

The adapter also powers the iPad from a power adapter.

Stereo output of the Scarlett (previously was the iPad headphone out) is then connected to the Mackie mixer and from there to a dedicated M-Audio Audiophile 24/96 audio card in my Windows computer and into Zoom.

The Scarlett 2i2 does require a powered USB hub to use with the iPad.

The Shure MV-88+ USB microphone that I was previously using is awesome, and in many ways more convenient, but the Crown CM-310A mike has some real advantages. For example, I can leave my A/C on in my office while on long Zoom sessions since the CM-310A is both sensitive and very directional and also has built-in background noise canceling features.

Things are now getting freaky. 🙂

Here’s my latest Audiobus setup for a dual input system that has one processing chain for my voice/whistle microphone, and another for the pipes/accordion microphone:

Unfortunately, I can’t share the AUFX effects between the two input channels from the Scarlett 2i2 as they are single instance apps, not Audio Unit 3 (AU3) plugins. So, to work around this, I had to use a different compressor and reverb plug-in for the Pipes/Accordion chain.

Here’s the Audiobus mixer view of the setup:

In this configuration, the workload was taxing the CPU resulting in occasional pops/clicks, so I had to dial back the latency settings from 64 frames@48KHz to 128 frames@44.1KHz:

Here’s the apps I use as they would appear on the iPad’s desktop. Audiobus 3 is in the dock in this screenshot: