For years my apps have been standalone instruments and did not work with Audiobus or Garageband. I simply didn’t know how to add this capability. A few weeks ago I was chatting with Jesse Chappell, the developer of ThumbJam, and he convinced me that I should really look into adding Audiobus and Inter-App Audio capabilities to my apps.

It was a challenge, but I was able to update many of my more popular iPad apps to now include Audiobus and Inter-App Audio, eight of which were released this morning:

Major updates out now for all of the following apps that adds Audiobus as well as Inter-App Audio Instrument support for use with GarageBand:

I’ve also submitted updates to Apple of several of the flagship Hohner accordion iPad apps to include Audiobus and IAA integration, so stay tuned for more news in the next few days about those when they are available. These include the Hohner two and three-row Diatonic Accordions, Piano Accordion, and Chromatic Button Accordion apps.

A huge thanks to Jesse for his support and convincing me to go down this path.

I hope you will enjoy them I’m looking forward to seeing how people will use these apps now that they support Audiobus.

Sam Rizzetta, one of the world’s masters in the design and building of hammered dulcimers, has come up with an innovative design for conductive hammers to use with my apps. 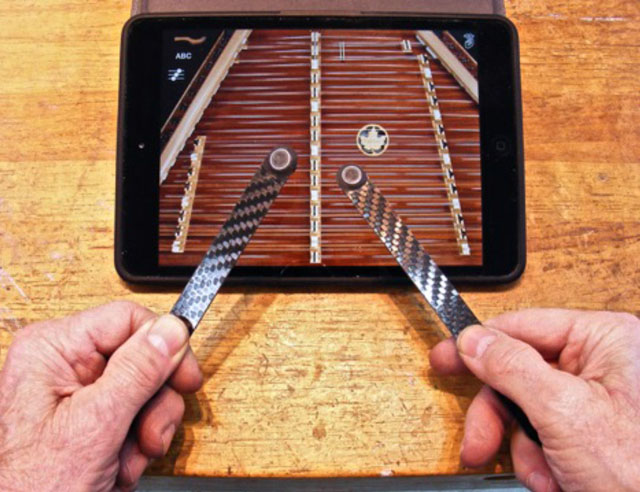 Now for something completely different… 🙂

Have fun learning to tune your Hammered Dulcimer
entirely by ear with this innovative new music game!

I blame Jim Przywara, he was joking with me last week about making my hammered dulcimer apps more realistic by having them go randomly out of tune… 🙂

AppCordions.com was featured on “The Daily News Tech Show” with Tom Merritt:

Check out the “Picks of the Day” segment starting around 30:20!

Imagine every Roland Sound Canvas MIDI module in an iPad app for $19.99, works perfectly with all my MIDI controller apps.

Sound Canvas for iOS supports the four different sound maps compatible with the Sound Canvas series, including SC-8820, SC-88Pro, SC-88 and SC-55. Also supported are the GM2 and GM tone maps. The powerful built-in effects include Reverb, Chorus, Delay, 2-Band EQ, and 64 types of insertion effects. Sound Canvas for iOS can also play SMF data for the SC-88Pro, and SC-8820 .

I’m a great fan of Dusty Strings hammered dulcimers, having previously owned a Dulcetta, a D10, and a D500. I’ve been playing their instruments for over 25 years.

For several years now, Ray Mooers, the founder and president of Dusty Strings has asked me at the annual NAMM show about writing a hammered dulcimer app for them.

Well, I’ve held off talking about this in public until it was ready for release, but now it’s real, it’s amazing, and it’s coming very soon to the iTunes App Store.

Stop the Dusty Strings booth at NAMM 2016 in Anaheim, CA. to experience it in person!

I am thrilled to report that the entire family of my Trapezoid hammered dulcimer apps for the iPhone and iPad are now available for purchase on the iTunes App Store!

Here are the direct iTunes App Store links to the apps:

Trapezoid for iPhone – On sale for $0.99 for the first week!
Download the iPhone version from the iTunes App Store

Trapezoid MIDI for iPad
Download from the iTunes App Store

For those of you with the 1.0 version of Trapezoid for the iPad, be sure to download the latest update version 1.6.3 from the iTunes App Store.

Version 1.6.3 is a major update and adds the following new features:

Trapezoid now supports both Standard and Michigan (octave) tuning. Switch between the turnings on the settings screen.

The app now supports traditional “drag rolls” technique. Drag rolls are performed by quickly dragging your finger quickly across the string horizontally. The can be enabled or disabled on the settings screen, when you can also adjust the sensitivity. The higher the sensitivity, the shorter distance you need to move your finger to get the effect.

You may now choose between Traditional or “StrikeZones” instrument styles.

The new “StrikeZones” instrument style shows you exactly where to touch on the screen for each note. The zones light up when touched. It is an excellent tool for understanding or teaching the layout of the instrument.

As suggested, replaced the C5 at the top of the Bass bridge with a D#5.

Version 2.0 of Trapezoid for iPad is currently in review with Apple. It will add the ability to switch between hard and soft hammer sounds.

There’s an amazing and easy to use music production and performance capability built into your iPhone or iPad that you probably have no idea is there.

The technology is called CoreMIDI, and was brought to iOS from the Mac OS way back when iOS 4.2 was released back around 152 B.C. (aka 2010)

MIDI is an industry standard that describes music in terms of the performance events that happen in real time instead of the actual audio waveforms. MIDI messages describe the physical act of playing the instrument, i.e. play this note, stop playing this note, change the volume, bend the pitch.

For every app I write that makes sound, like Trapezoid, Irish Flute, World of Bagpipes, and the Hohner SqueezeBox accordion apps, I also release a CoreMIDI controller version that lets you use the skills you already have playing these instruments in real life to play other kinds of sounds instead of having to use a piano keyboard.

A MIDI controller or keyboard is exactly the same. If you want to use it to make music, you have to plug it into something else that can take the stream of event data coming from the controller and turn those note-on and note-off events into musical tones.

The something else in the case of my apps are synthesizer apps like “ThumbJam” and “SampleTank” (and many, many others) that take the stream of MIDI data generated by my apps and render the music note-on and note-off events described in the stream.

It is also possible, using a hardware MIDI interface (like the IK Multimedia iRig MIDI) to send the MIDI data from the iPad to another hardware device, like a rack-mounted Roland synthesizer module, or even a PC or Mac running it’s own synthesizer program like Kontakt and have it convert the note-on and note-off events into music.

So, in Trapezoid MIDI, when you hit the A4 string on the treble bridge, my app sends out a command to iOS that says “He hit the note A4”.

The other synthesizer apps listen for these events and when they receive them, they play the notes described in the command.

So if ThumbJam is running, and in ThumbJam you’ve selected a harp sound, you’ll hear a harp play the note A4 when it receives the message from my app.

MIDI messages also have a channel number (1-16) associated with each message that can be used to selectively play different notes.

The same general principles apply to my MIDI bagpipes chapters and other MIDI controller apps, you play them just like the real instruments and they generate the note-on/note-off MIDI data streams and send them to whatever you want to use as the sound generator.

Linda says I should write a more extensive article about using CoreMIDI on the iPhone and iPad, but until then, here’s a great tutorial explaining more what the heck this is all about and what it makes possible:

Big news about my “MIDIChanter” and “MIDIPipes” Scottish and Irish Bagpipes MIDI practice chanters, “MIDIFlute”, and “Trapezoid MIDI” apps for the iPad!

For those of you who are interested in another option for practicing Scottish or Irish bagpipes on the iPad, I wanted to tell you about “Universal Piper”, a MIDI bagpipes sound generator app for the iPad that I discovered a few months ago.
http://www.universal-piper.com

Unfortunately, my MIDIChanter and MIDIPipes apps didn’t work with it because I didn’t originally implement the virtual MIDI output ports required to work with Universal Piper.

Previously, both apps would send the MIDI note data stream to all other synthesizer apps running on the iPad. This works for most use cases, but having the option to have a named virtual MIDI output port opens up all kinds of interesting scenarios, and in the case of “Universal Piper”, makes it possible to use the app. Apps like this require that you pick your MIDI source device from a list of known MIDI devices, and before this update, my apps would simply not show up on the list.

I’ve just submitted updates to all of practice chanter apps to add the virtual MIDI output port feature and they work perfectly now with Universal Piper, MIDIBridge, and other MIDI apps that require the virtual MIDI ports!

This is a pretty big deal!

As part of the update, I’ve put together tutorial videos for my users showing how to configure both my apps and Universal Piper.

Here are the links to the tutorial videos:

Both apps have the proper fingerings for the style of bagpipes they support.

I am looking for anyone who would be interested in testing pre-release TestFlight beta versions of the apps.

All of the updates as well as “Trapezoid MIDI” should be available as free updates to those with the previous versions around January 10th.

Please send me your email address if you like to be a beta tester for any of the apps, and I will add you to the invite list. You need an iPad running iOS 7.1 or later as well as have some familiarity with using MIDI apps on the iPad.