The release of iOS9 has forced me to make some difficult decisions regarding continued sales and support for the earliest apps I developed nearly 5 years ago.

They were all fine until yesterday, and now on devices with iOS9 they crash at launch.

Updating them for iOS9 and modern devices would be a major effort requiring me to essentially start from scratch for each app and I just don’t have the enthusiasm or energy to take this on at this time.

It is with a heavy heart and to be honest, a sense of relief, that I’m announcing the end of life and no future updates to the following iOS apps:

If you have any of these apps and they are currently working for you, nothing will change.

They are not compatible with iOS9 and I will not be doing any further work on them. If you upgrade to iOS9, they will crash if you launch them.

They were so old that Apple wouldn’t even let me update their descriptions to say “not compatible with iOS 9” unless I uploaded a new version.

They have all been removed from sale on the iTunes App store.

If you bought one of these apps, thank you! I truly hope you enjoyed them. It’s been a good run having these apps run without any updates for the most part since iOS 5.

I do plan to update the following two apps so they don’t crash on iOS 9:

as I am a very strong believer in the use of the English Concertina layout as a nearly perfect music control method for a phone.

There are also a whole bunch of updates I need to do for most of the Hohner Diatonic Accordion apps for both iPhone and iPad as well as all the Concertina-related iPad apps to address a click noise that is occurring at the end of sounds. I’ll be rolling those updates out over the coming weeks.

Cheers and thanks for your support over the years!

I’ve seen that same look many times just as they walk around the corner of the glass wall at the entrance to the pub. Most likely they just came in after a long day at work for a pint of Guinness or to catch a game on the TV, but suddenly out of nowhere they find themselves smack in the middle of a flock of fiddles, flutes, whistles, Uilleann pipes, and bodhran flying with wild abandon through endless sets of Irish jigs and reels.

The look on their faces always says the same thing: “What in the world is going on here?” What’s happened is that they’ve just walked into the Tuesday night traditional Irish session at the Ould Sod, a pub in Normal Heights, which George Rubsamen and I have been hosting every Tuesday night for over five years. I’ve seen that same look hundreds of times.

So what exactly is a session? An Irish session is an informal gathering of musicians playing sets of traditional Irish dance tunes on traditional Irish instruments. These instruments most commonly include the fiddle, flute, tin whistle, concertina, button accordion, bodhran (frame drum), and Uilleann pipes (Irish bagpipes). Sometimes there might also be a guitar or eightstring bouzouki (octave mandolin) providing rhythmic backup.

The most common question I get is, “What is the name of your band?” When I explain no, we’re not a band, it’s an Irish session, they generally ask, “Oh, so it’s a jam session? I play a little guitar, can I join in?” Well, yes and no…

An Irish session has a structure and set of sometimes frustratingly simple rules that are more or less the same wherever you go in the world. This structure gives an Irish session a distinct feel and sound. Unlike jam sessions in some other styles of music, players of melody instruments only play the tune melody in unison with no harmony lines. Faking through a tune one doesn’t know, or extensively improvising on tunes, is generally considered poor etiquette. Also, because the chord structure to many tunes can be somewhat complicated and oftentimes ambiguous, the chances of two backup players picking the same chords is very small, and as a result many sessions (including ours) have a rule of only one backup instrument playing at a time.

In an Irish session, the tunes played in a set are generally all of the same type, most commonly jigs or reels, with the occasional hornpipe or waltz. Most commonly, each tune is played three times before moving on to another. Often times, there are fixed sets of tunes that everyone in a particular session knows in a particular order. It’s also as common that the tunes will be selected “on the fly,” with the next tune to play being determined by someone during the last time through a tune. When this happens, everyone has to listen closely to what is played next and quickly join in. In some sessions, one person picks all the tunes, in others, like ours at the Ould Sod, any player can pick the next tune in a set, and if two people start a next tune, it’s good courtesy for one person to quickly back off and let the other player take the lead. This can go on for a long time. We’ve had sets of reels that have gone on for more than a half hour.

The next most common questions we get are about the instruments and what they cost. Most people are familiar with fiddles, so we don’t get many questions about them. The flutes played in traditional Irish music are quite distinct from modern silver flutes; they are based on the old wooden English flutes designed back in the mid 18th century and have anywhere from zero to eight keys. For most tunes, you don’t need the keys, and keyless flutes are quite a bit less expensive than keyed flutes. A good keyless blackwood flute costs about $1,000. A perfectly good pennywhistles in the key of D can be bought from most music stores for less than $10, but a whole cottage industry has sprung up to make a range of instruments out of different materials and with specific tonal qualities. Most of these whistles sell for between $100 to $300.

I happen to play the Uilleann pipes, which look like I’ve been attacked by some sort of alien octopus. The pipes are made of leather, ebony, and brass, so I get a lot of questions, usually along the lines of “Is that some sort of bagpipe?” and “How does the air get into that thing?” and often “How much does something like that cost?” The Uilleann pipes are a bellows-driven bagpipe, with the same range as the flute, having a much quieter and sweeter sound than the big Scottish warpipes. They are used quite often in movie soundtracks and commercials to convey an Irish mood. Most people have heard them but have never seen them played, so here’s how it works: Under my right arm is a bellows that I use to pump air into a leather bag under my left arm. From the bag, the air splits in two directions, the first into the chanter, on which the melodies are played, and the second, to the mainstock, which contains the drones and regulators. The drones, much like the Scottish pipes, sound a constant D pitch in three octaves, but unlike the Scottish pipes can be turned off with a valve. The regulators, which lie on top of the drones, have keys that I can press with my right wrist (while still playing the melody on chanter with my fingers) to provide chords under the melody lines. It’s a difficult instrument to master. Every piece of the instrument is handmade, and there are only a few good builders in the world. A full set of pipes can easily sell for over $10,000.

Sometimes Irish sessions have a reputation of being somewhat unfriendly and strict. In reality, the simple rules of etiquette are there to help make sure that the music sounds good and that everyone has a good time. For example, there are only four simple rules at the sessions I host:

1. Tune your instrument and try to keep it in tune during the session. An in-tune session sounds better to everyone, and instruments drift in pitch over the course of an evening as the temperature changes.

2. When someone starts a set of tunes, try not to speed up or slow down from the speed they originally set. There’s nothing more discouraging than a new player finally getting up the nerve to start a set of tunes, only to be blown out of the water by some insensitive player who speeds things up to where the new player can no longer keep up.

3. Play the tunes you know, don’t play the tunes you don’t know. This one seems simple enough, but it can be very tempting to try and play poorly a tune you don’t really know, often times distracting the person sitting next to you who does know the tune. This particularly applies to backup players since the chord changes in the tunes aren’t always straightforward.

4. One backup player or bodhran (frame drum) at a time. As with multiple backup players, multiple bodhran playing at the same can result in cacophony, and can often be louder than the melody players, so one at a time, please.

Here’s the list of Irish sessions I’m involved with in San Diego:

I really wanted a Chromatic Button Accordion app for the iPhone for my own enjoyment, so I wrote one.

Well, two actually, both C-System (the kind I play) and B-System. 🙂

I didn’t want to leave the B-System players out of the fun.

Both are available now on the iTunes App Store for $0.99 for a limited time. 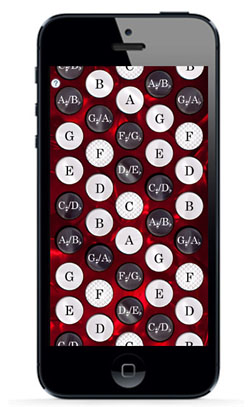 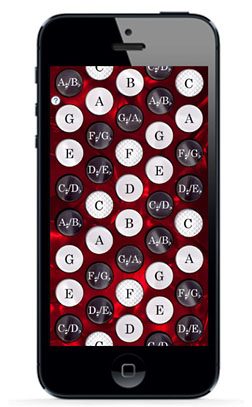 The latest free updates to the Hohner Piano and Chromatic SqueezeBox apps are now available on the iTunes App Store!

With the update, both apps are now compatible with iPads that have iOS 7.1 or later. (previously was iOS 8.4 or later)

This update allows you to choose either:

for the buttons on the left side of the instrument.

The MIDI controller versions of the apps already have this feature.

If you have the Hohner MIDI Piano or MIDI Chromatic Accordion control surface apps for iPad, go grab the latest free version 1.5 update from the iTunes App Store!

This version adds the option to switch between Bass/Maj/Min/7 and Counter-bass/Bass/Maj/Min for the left side of the instrument.

I submitted updates to Apple this morning for the Chromatic, Piano, and Piano-Mini SqueezeBox apps to make them compatible with iOS 7.1 or later.

Previously, the acoustic apps were restricted to iOS 8.4 or later. This should greatly expand the audience for the apps to millions of more potential players.

Assuming all goes well in review, look for the free updates around September 10th.

I’ve just submitted updates to Apple for both the Hohner MIDI Piano and Chromatic apps adding a new option to select between Bass/Major/Minor/7 or Counter-Bass/Bass/Major/Minor configurations on the bass side.

Here’s a couple of screenshots: 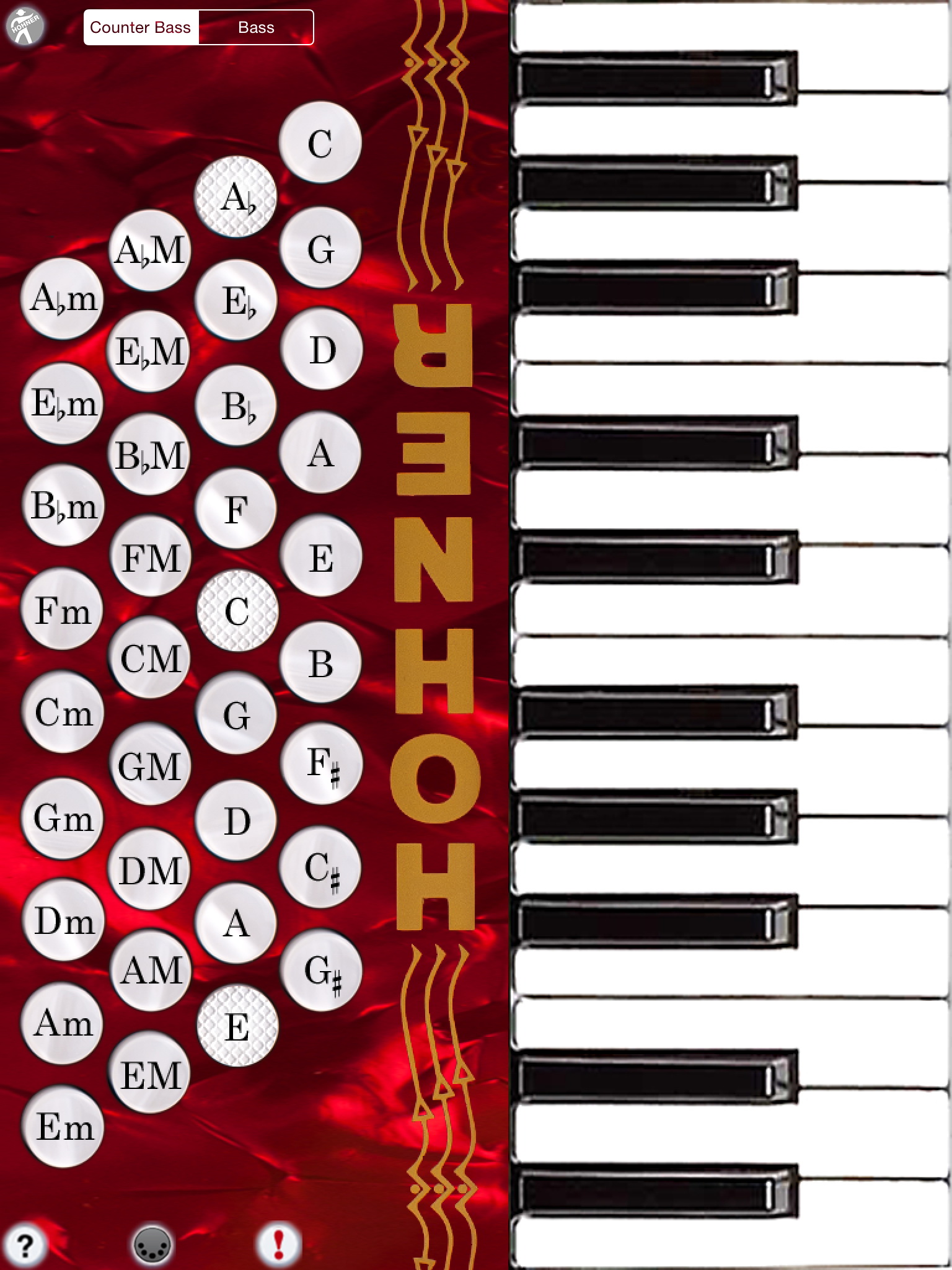 MIDI Chromatic in C-system and the counter basses enabled 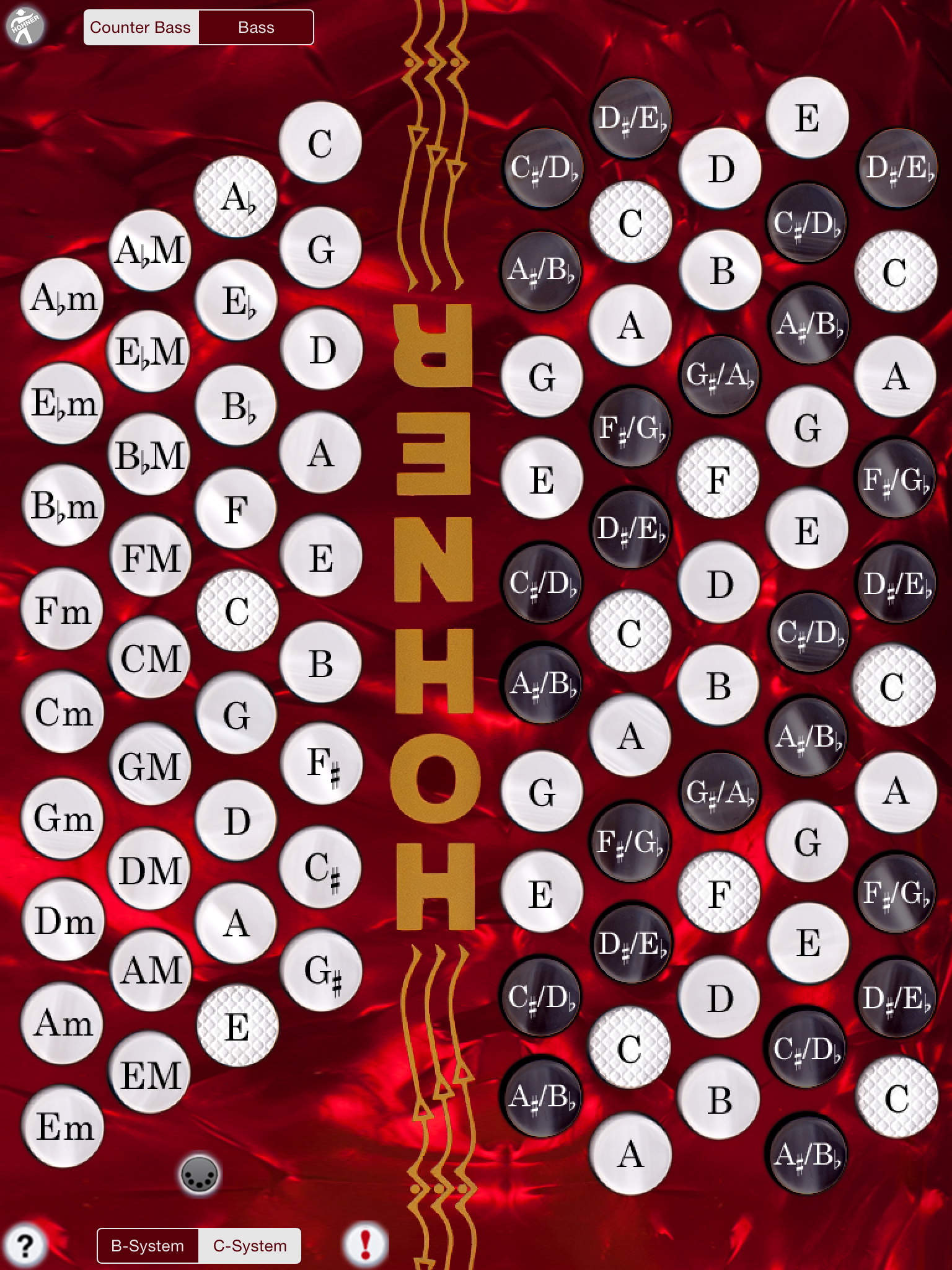 Look for both as free updates on iTunes around September 10th.

I’ve just submitted updates to Apple for both the Hohner Piano and Chromatic SqueezeBox apps adding a new option to select between Bass/Major/Minor/7 or Counter-Bass/Bass/Major/Minor configurations on the bass side.

Here’s a couple of screenshots: 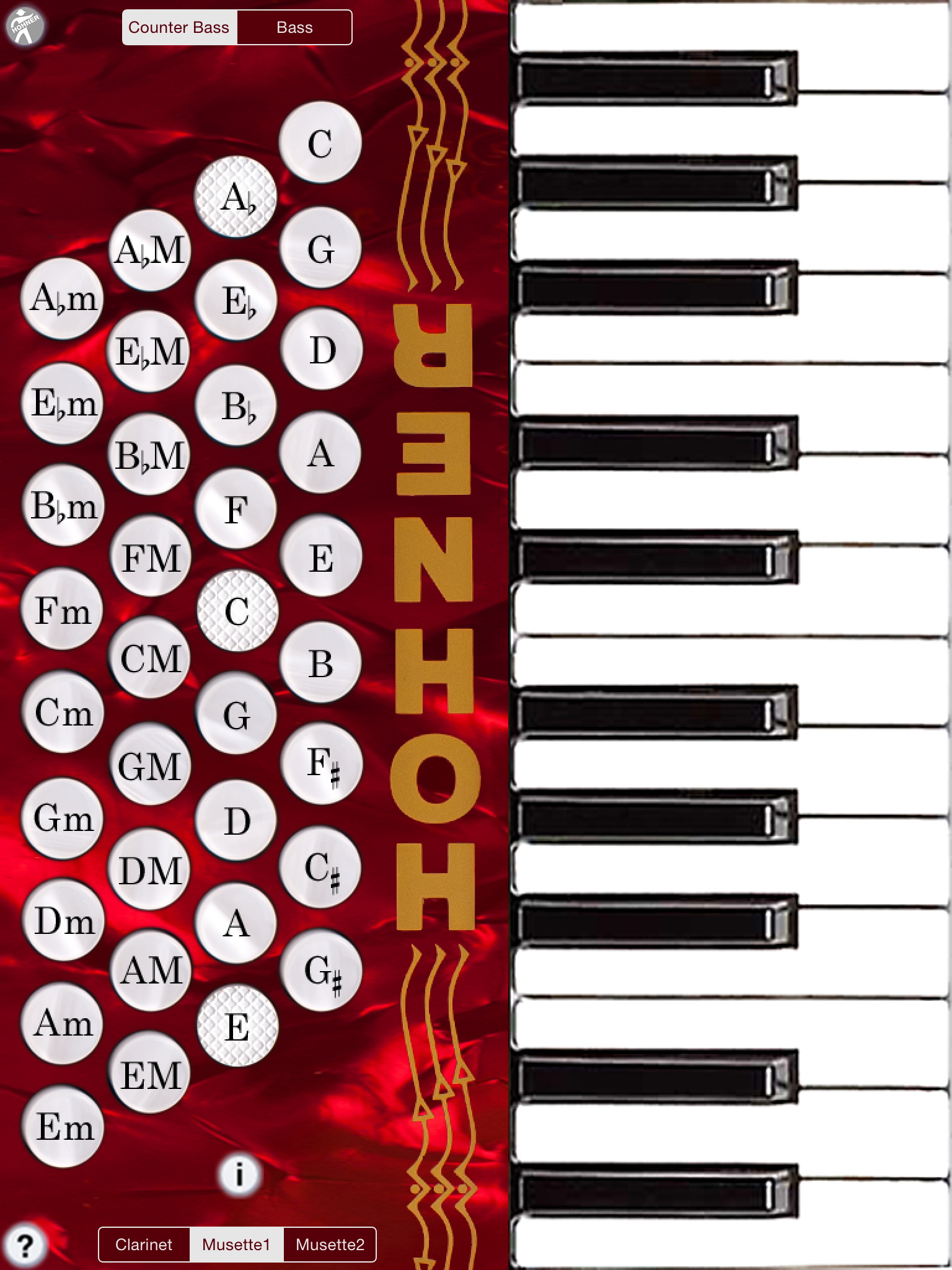 Chromatic in C-system and the counter basses enabled 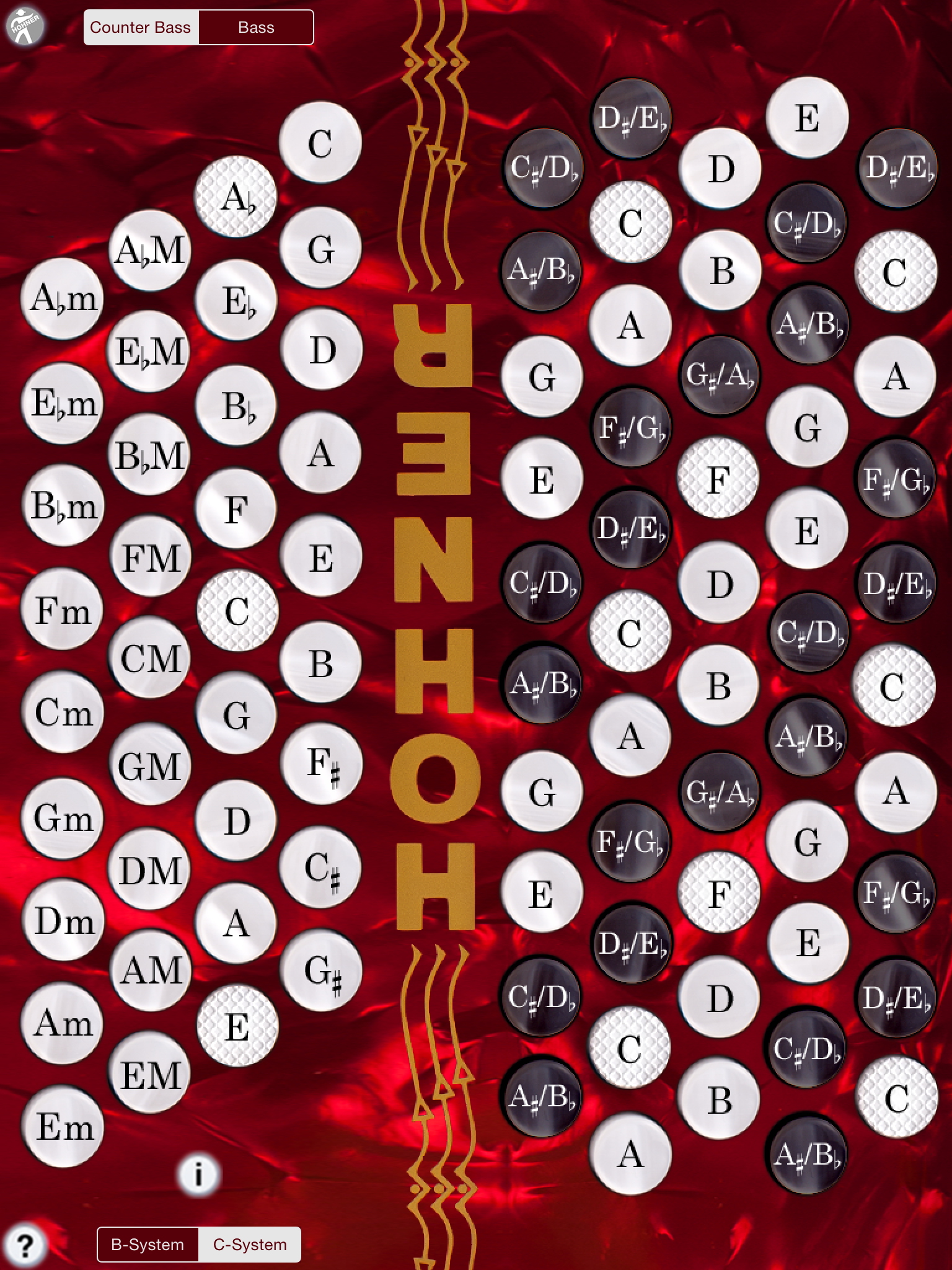 Look for both as free updates on iTunes around September 9th.

Watch as I use the app to play string ensemble sounds from IK Multimedia SampleTank running as a synthesizer app in the background on the same iPad.

Song is “Estrellas” by Stéphane Delicq.